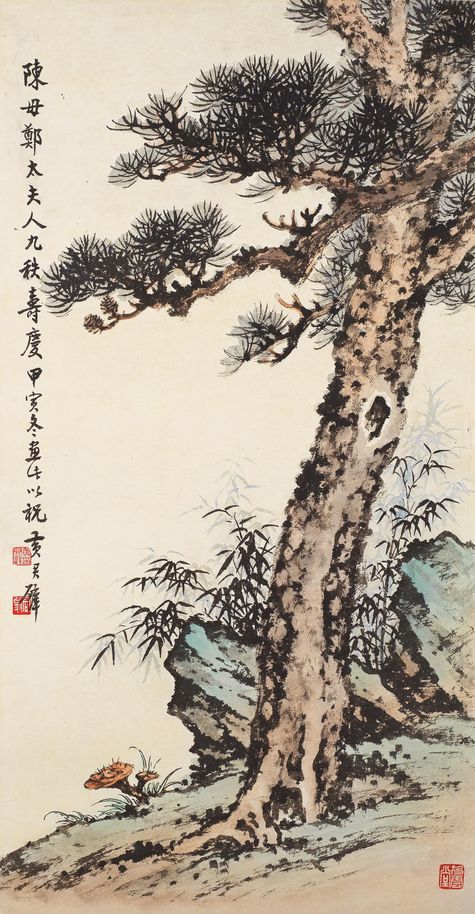 Ink and colour on paper, framed

PROVENANCE:
Acquired directly from the family of the recipient

Huang Chun-Pi devoted his life to painting, with a focus on life observation and innovation. His paintings have a solemn character with high precision in brushwork, which highlights its representation of light and dark. Through life observation, the elusiveness of clouds and mists were depicted with close resemblance, thus making his works well acclaimed by all.

This work was painted in 1974 at Huang's age of 77. Pines and lingzhi have long been associated with longevity, thus the symbols were used to commemorate the receiver's birthday. Bamboo was also used to highlight her noble character. With a vertical structure, the pine and rocks were put in the foreground to create depth as if looking through a window. Light and dark were highlighted with the application of brushwork. Dots and dried brush were applied on the base of the rocks and the root of the pine, highlighting the solemnity of the work. Despite its simplistic composition, the solemnity of the work was reflected through dense ink, cun and the forms of rough rocks. Wet and dried ink of ochre and green were alternatively applied to demonstrate the texture of rocks and the rough scales of the tree trunk. Pine stands upright stretching from the bottom of the work, highlighting the nobility of pine. Using perspective of Western techniques, a branch perches from the right, to highlight the layers and the density of the tree. Bamboo leaves were painted in different gradients, with hints of Western application of colours. With careful choice of brushwork and ink gradients, this work possesses a fresh yet solemn character, thus making it one of the greatest works of the artist in his late career.
Related Info