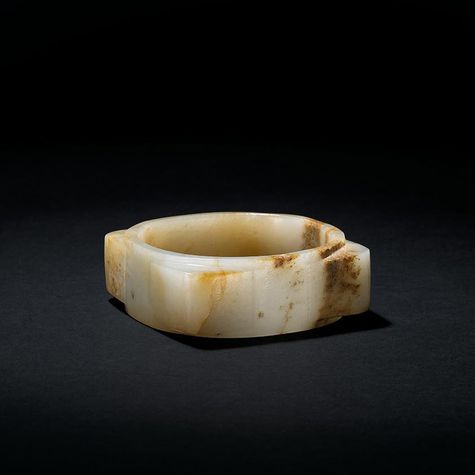 In the Huaxi cultures, people represented their beliefs by the forms of objects, thus objects have no decorations, unlike their Huadong counterparts. The ritual of bi and cong started in Yangshao and Qijia cultures near the middle and upper reaches of the Yellow River. This practice gradually diminished in the Shang and Zhou dynasties. Despite their status as spiritual objects, less cong were found in the archaeological sites with Shang and Zhou activities. This white jade cong is low in height, polished with no engravings. Such features echoes precisely with archaeological findings in these sites. Furthermore, it reflects the cultures of Huaxi.

Shang and Zhou dynasties (BC1523-BC256) were heavily influenced by the Huaxi cultures. Despite the diminishing popularity of the bi disc and cong ritual, such cong could still be found. This suggests that some scholars still upheld their ancestral traditions. As we look back to the 7000 years of history, Qijia culture, Xia, Shang and Zhou dynasties were only roughly mentioned with very little understanding. Culture and histories are lost. Given the limited resources, historians of the Shang and Zhou period would have a much harder time to trace their past cultures. Stories and rituals would have been passed by mouth and painstakingly recorded in the Rites of Zhou. Such records would not have retained without concerted respect towards our ancestry. Under this hypothesis, this white jade cong could be regarded as a rare relic as it passed down the centuries.

An adage goes, white jade does not need embellishments, while a beautiful pearl does not need to be praised. This white jade is lucent in white with russet inclusions. In the modern aesthetic standards, its elegant form, lucent quality and soft texture delight the senses of a collector elevating their modern aesthetic lifestyles through its historical significance.
Related Info