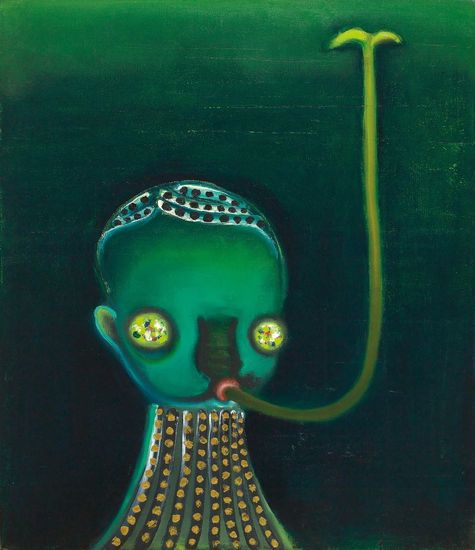 Born in the Shimane Prefecture, Japan in 1969, Izumi Kato graduated from the Department of Scenography, Display and Fashion Design at the Musashino Art University College of Art and Design. At university, he became obsessed with music and performance, and began focusing mainly on music for ten years after graduation. In 2005, he participated in the exhibition "Little Boy: The Arts of Japan's Exploding Subculture" held at the Japan Society Gallery in New York, where he started gaining attention. Two years later, he was invited to the 52nd Venice Biennale International Exhibition. When he turned 30, he began painting again after realizing that he still longed for artistic exploration. His style of painting also shifted from symbolism to "more humane forms and faces. With "life forms" as the theme, he drew inspiration from animals, plants, insects and human forms to create a series of three-dimensional paintings. Full of a primitive and mysterious power, his works are not limited to a particular medium.

The "humanoid" created as a part of Kato's Untitled (Green) painting is a unique character, but may also become associated with other characters with wide-open eyes and recognizable body shapes. The appearance of plants near a "humanoid" signifies life. Its placement in the shady area makes it seem like an embryo or alien. The composition consists of an exaggerated disproportion between the head and the torso, piercing eyes that are further apart, a masculine symbol of a nose, and hair curls like a Buddha statue. The whole canvas of green gradation presents a sense of proportion and colorful tones along with a complex combination of concrete and folk imagery. Seemingly strange-looking at first, it is simple and cute after careful inspection. The more attention is paid, the more one can experience a certain hidden mysterious experience, as if the power of a silent stillness can be heard.