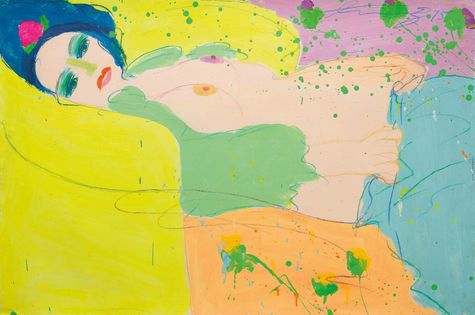 Love Me Love Me

Walasse Ting, also known as “The Flower Thief,” is internationally renowned for paintings of colorful flowers and beautiful women. Born in Wuxi, Jiangsu Province, China in 1928, he studied at the Shanghai Academy of Fine Arts. At the age of 18, he moved to Hong Kong. At the age of 22, he traveled to Paris, France.He held a few exhibitions in Paris and Brussels. At the age of 30, he moved to New York where he was influenced by abstract expressionism and gradually formed a splendid and unique painting style. By the 1970s, Ting, having spent more than ten years in New York, changed his artistic style from abstract to figurative paintings and began to develop a style in which the strokes were strong and wild. The technique employed vibrant colors, an approach reflecting Ting’s character. In terms of the artistic atmosphere, New York city itself, free and innovative, also took part in shaping Ting’s later style. He spent large amounts of time painting”women,” his favorite topic. During this period, the lines in his works demonstrated similar styles from Fauvism. During his early days in Europe, the CoBrA artists already provided Ting with the inspiration for a similar style.

“Love Me Love Me” is a work by Ting created in 1973. The romantic and bright style of Ting, which began in the 1970s, is based on the theme of the female body and supplemented by flowers and plants. Ting depicts the alluring beauty of flowers and women, captured in abundantly rich and bright images. The painting displays Ting’s highly-refined ability to create an alluring and glamorous world with the use of bright, vivid, and fresh colors while offering a feast for the senses. In the painting, a beautiful white-skinned woman is lazily lying among the yellow-green flowers, looking graceful and gorgeous. The artist reveals his wild passion and creative energy through the brush strokes. The figure is outlined by neat lines, the background is filled with splashing and dripping paint that is full of energy, a technique common to abstract expressionism, and smeared with high-color patches. Ting’s paintings are naked and sincere, skilled and innocent. His unique artistic vocabulary creates contemporary classic by reinterpreting nude paintings by such masters as Titian, Manet, Modigliani, and Matisse.
Related Info