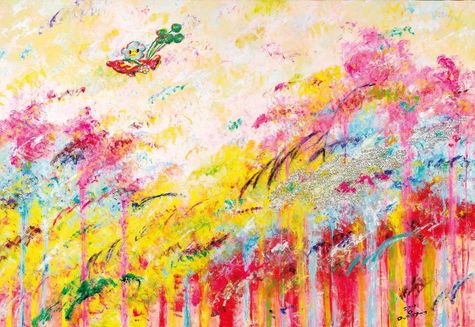 Born in Chiba Prefecture, Japan, Ayako Rokkaku never received any formal training from an academy of art. Using her bare hands, she applies acrylic paint directly onto the canvas or paper, developing her unique and independent painting language via "finger painting". Before the work commences, she lets go of any preconceptions. Without preparing any drafts, she proceeds on her feelings alone until a work of abundance and uniqueness has been created. Around 2001, she would frequently appear in parks in Tokyo by herself, where she would dip her fingers in and smear paint onto corrugated cardboards, or simply sit on a bench for a whole day. In 2006, the Japanese art community began to take notice of her works, which were then exhibited in the Geisai organized by Takashi Murakami. The event further propelled her into the spotlight.

Rokkaku creates art as if weaving the fabric of dreams, using colors to materialize landscapes, small flowers, animals and flying ships hovering within. Seemingly, everything on the canvas may be able to move to and fro freely in this world of wonder. The colorants and graphic shapes are combined in a non-traditional manner, where the subconscious and emotions roam with reckless abandon. Perhaps it is a type of more direct "releasing of the consciousness", where the consciousness drifts between her fingers and the brain, separating the artist from the traditional system of painting, while wandering in the dream-like world and having them "land" on the surface of the canvas. This is one of the methods that Rokkaku expresses her personality in paintings. In recent years, Rokkaku has experimented with various new painting materials and methods to demonstrate her rich artistic vocabulary, including the use of wool, cardboard installations, multi-layered sculptures and hand-painted vintage Louis Vuitton suitcases.
Related Info