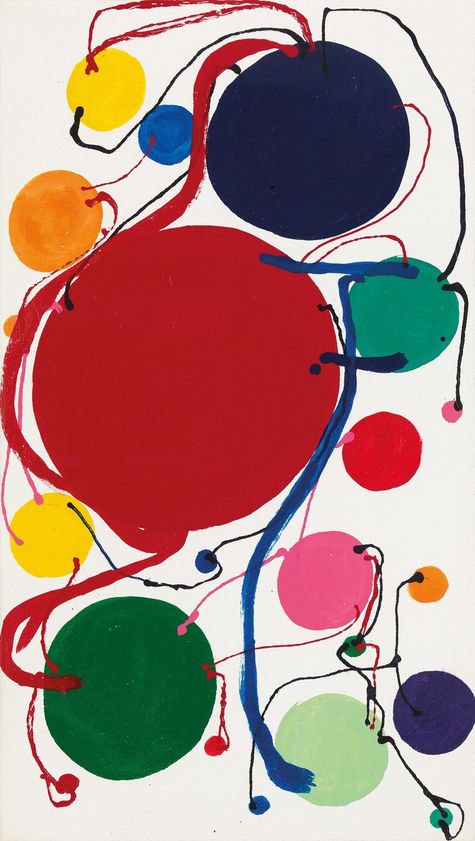 PROVENANCE:
Est-Ouest Auction, Hong Kong, December 1, 2015
Acquired from the above by the present owner

From 1953 to 1958, the art of Atsuko Tanaka struck the global art scene like lightning with styles spanning minimalism, which had just emerged at the time, to conceptualism, which had changed the role of physical materials, and even extending to transmedia strategies. Her development was ten years ahead of those of art movements that appeared later in Europe and the United States. The work titled 99-A marks a divergence between the original "Gutai'" philosophy and Tanaka's creations later in her career. From there, Tanaka shifted her focus from 3D installation art to graphic paintings, as different forms of polka dots and circles became the primary elements of her creations.

Tanaka likes to encircle and connect the rings in her paintings with threads of lines. The full-colored circles look like "units of life" that keep on stretching and bouncing within the boundary of a frame, entrapped within mixed trains of thought. These lines neither have a beginning nor an end. In this way, the visual language penetrates the expressive textures of daily life, thereby presenting the fascination and openness that brighten up Tanaka's paintings later in her career. Tanaka herself has always referred to these transmedia artistic experiments as "paintings," which laid the foundation for substantial abstract splash paintings in her later stages of artistic creation. As a representative figure in the group of post-war female artists, Atsuko Tanaka's work has always featured a strong transmedia art spirit. In particular, her colorful and decades-old Line and Circles is her most celebrated series of abstract installation art.